We've partnered with the Fish and Wildlife Compensation Program to create a video and brochure that shows how a new reservoir changes the methylmercury levels in fish. You'll learn about methylmercury, how methylmercury levels may change in Peace River fish, and how you can stay within Health Canada's guidelines for safe fish consumption.

Methylmercury, an organic form of mercury, is created when microorganisms that live in aquatic environments react with the inorganic mercury that exists naturally in soil and plants. Once formed, methylmercury enters the food chain.

The process of converting inorganic mercury to methylmercury temporarily speeds up when a new reservoir is created due to the rapid decomposition of soil and vegetation previously on dry land. 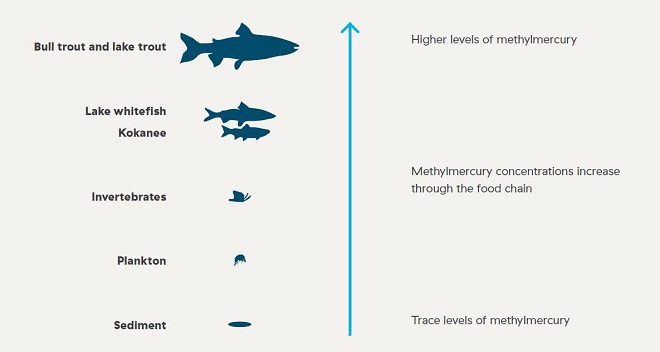 Based on Health Canada's guidelines and our predictions of fish methylmercury levels, people who eat two or fewer servings of fish a month, on average, from the Site C reservoir do not need to be concerned about the amount of methylmercury in the fish. However, people who eat more than the recommended number of servings of fish from the Site C reservoir, or eat more than one kind of fish, may need to limit their consumption of large predatory fish, such as bull trout and lake trout, to stay within Health Canada's safe level of methylmercury.

At their highest, levels of methylmercury in fish from Site C are expected to be similar to levels in fish found in many lakes and rivers elsewhere in Canada and lower than some types of fish sold in stores and restaurants. In general, predatory fish (fish that eat smaller fish) are more likely to have higher levels of methylmercury due to accumulation through the food chain.

The relatively low methylmercury levels expected in Site C reservoir fish are due to the low pre-existing levels of mercury and to the project's design. Because Site C will rely on the existing Williston Reservoir for most of its water storage, the extent of flooded land – which drives methylmercury production – at Site C is small compared to many reservoirs.

In collaboration with Indigenous groups, communities and health authorities, we developed a Methylmercury Monitoring Plan for Site C to verify predicted levels of mercury in fish. The plan includes regularly measuring methylmercury levels in local fish and collecting information on how much fish people are eating. This information will be communicated, in partnership with health authorities, to Indigenous groups and the general public.